Nearly 40 million people in the U.S. hold about $1.4 trillion in student loan debt.[1] It’s estimated that college graduates from the Class of 2016 will each rack up an average of $37,000 in student loan debt, an increase of six percent from last year.[2] In an effort to alleviate college debt for bright, Chicago-area, college-bound high school seniors and keep them on the right track throughout their college journey, The George M. Pullman Educational Foundation announced the 30 new scholarship recipients to make up the 67th Class of Pullman Scholars.

Rooted in Chicago since 1950, the George M. Pullman Educational Foundation has invested more than $32 Million in Chicago’s driven yet under-resourced students who aspire to earn a college degree. The newest class of Pullman Scholars, who are now settled in on campuses across 16 different universities, will have cumulatively received nearly $1 Million in scholarships and educational supports during their pursuit of a four-year college degree.

Without the burden of immense debt, similar to the more than 14,000 Pullman Alumni that came before them, this year’s 30 Pullman Scholars are attending schools such as Chicago’s own DePaul University, Loyola University Chicago, and the University of Illinois as well Howard University, California State University, Long Beach and Duke University to name a few. Nearly half of this year’s class of outstanding individuals are first generation and the majority (63%) are young women. The 67th Class of emerging leaders are now able to pursue some of today’s most in-demand fields, including biochemistry, engineering, public policy, public health, pre-med and international relations, made possible by the four-year renewable scholarship up to $10,000 a year.

“The mammoth cost of a college education, and the heavy burden of debt, is definitely a hot topic in this heated election year. For many American families paying for college is a dream that is quickly growing beyond their reach,” says Robin Redmond, executive director of the Pullman Educational Foundation. “For each Pullman Scholar, we work to mitigate the financial burden throughout their time in school while ensuring they have access to the strength and expertise of our vast alumni network who can help guide them as they graduate and prepare for the future.”

The George M. Pullman Educational Foundation is ready to begin its search for 2017 scholarship candidates. Starting November 7 until February 3, Cook County seniors with a 3.0 GPA or higher, plans to attend an accredited college or university pursuing a bachelor’s degree and demonstrates financial need are encouraged to apply to become a Pullman Scholar.

If accepted, scholars can be eligible to receive up to $10,000 in renewable scholarship assistance for four years. Candidates interested in learning more about their eligibility and the application process should visit www.pullmanfoundation.org. Applications are open from November 7, 2016 to February 3, 2017.Pullman Scholar Class of 2020

Current Pullman Scholars and all 31 of the new scholar cohort attended our third annual Pullman Scholar Symposium on May 20, 2016, dedicated to developing our scholars’ financial literacy, life skills, and professional expertise, while building a stronger Pullman Scholar Community.

Based on scholar feedback from last year, this year’s sessions were made as interactive as possible. The symposium began with an inaugural Pullman Scholar keynote speech given by Corie Wilkins, a 2016 graduate of the University of Missouri. Corie discussed the ups and downs throughout his college experience and how he continued to overcome adversity, grew to believe in himself, and used resources to reach his goals. Scholars shared that listening to his journey was relatable, and Corie reiterated that no Pullman Scholar is alone, and offered strategies for success. 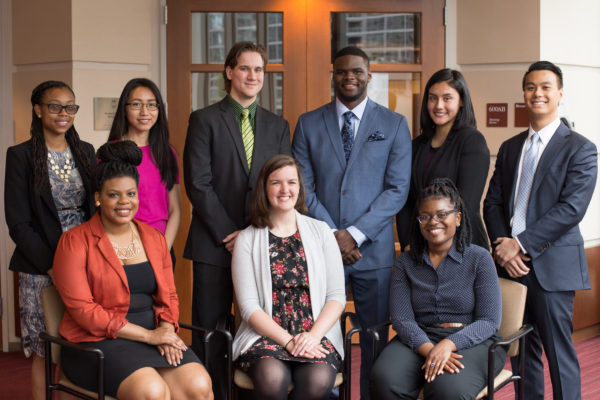 Another inaugural opportunity for our scholars at the symposium was leading a session. Nine Pullman Scholars planned and facilitated sessions — two scholars worked with session facilitators from last year to add a more student-centered focus and share their experiences, four scholars facilitated a panel discussion about finding and making the most of opportunities, and two scholars facilitated a core conversation about how to make influential, positive changes in their life, campus, and community. 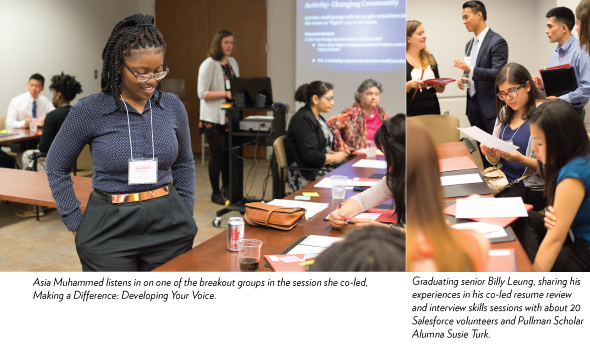 In the evening, scholars honed their networking skills during an interactive activity with more than Pullman Scholar Alumni and guests. Everyone was then inspired by keynote speaker alumnus Patrick T. Murphy, MS, Associate Director of Communications at the Midwest Augustinians, who spoke about his journey of finding his passion; philanthropy and helping people.

The day ended with a reception for current scholars, alumni and guests to grow their network and be inspired by each other.

Thank you to our alumni volunteers who helped throughout the day and everyone who was able to attend. It was a successful day of education for our scholars and an enlightening evening.

To experience the energy of the day, watch the recap video below: